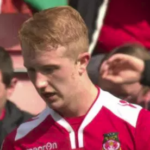 The 20-year-old centre half came through the youth team at Wrexham. He made several first team appearances and had a couple of spells on loan at Southport and Rushall Olympic before surprisingly being released at the end of last season. He signed for the Bay in August despite interest from a number of clubs.