THE Seagulls twice came from behind to beat ten men Atherton Collieries 4-2 for their second win in three days last Monday and, temporarily, go top of the Evo-Stik West table, writes Tim Channon. 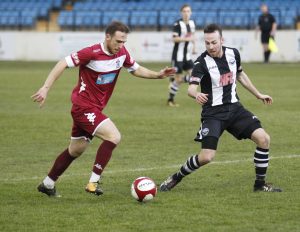 Atherton had goalkeeper Greg Hartley sent off after thirty nine minutes for handling the ball outside his area (although he claimed the ball hit him in the face). Full back Dave Sherlock went in goal, and although the home side led 2-1 at half-time, Colwyn Bay made the extra man advantage tell in the second half.

Atherton dominated the early stages and were in front after fourteen minutes when Bay keeper Paddy Wharton made a diving one-handed save from a glancing header, but couldn’t prevent Ben Hardcastle sweeping home the loose ball.

Earlier skipper Tom McCready had cleared off the line with Wharton beaten.

But the Bay equalised on twenty eight minutes with a glancing header by Ashley Ruane  from Josh Brizell’s cross following a corner.

They looked to be in the driving seat when Hartley was sent off, but the stand in keeper saved Brizell’s half blocked free kick and Atherton immediately launched a quick break for Connor Gaul to put them back in front with a well taken goal.

Bay, however, were unlucky not to be level at half-time when Josh Brizell hit the underside of the Atherton bar with a screamer.

The second half saw Colwyn Bay start to take control and the stand-in keeper did well to turn an Ashley Ruane shot over the bar and Danny Andrews had a penalty shout turned down before Ruane scored his second of the night to make it 2-2 on sixty two minutes minutes.

Three minutes later Bay were in front as Tom McCready’s cross from the left dipped over the keeper into the far corner of the net.

Wharton saved a point blank range header and made a super diving save from another effort before Bay had a real let off when Atherton twice hit the bar in a matter of seconds.

But on eighty four minutes Ashley Ruane teed up a super cross for substitute Callum Hassan to head Bay’s fourth and secure the points – the first time since 2012/13 that the Bay have won their opening two league games.

Manager Alan Morgan commented: “It was a good result because they are a good side. It took us half an hour to get going and I was really disappointed with the way we played first half, but to come here and get a result in the end was very encouraging.

“The sending off obviously made a difference for them, but we still had to come from behind to win it.”

Will Bell missed the game with a tight groin so Olly Marx made his league debut and did well.